MULTILINGUAL VOICE OVER SERVICES FOR VIDEOS

ITC Translations offers multilingual voice over services for your business and advertising videos so you can reach international audiences with audiovisual productions that are translated and localized for them. 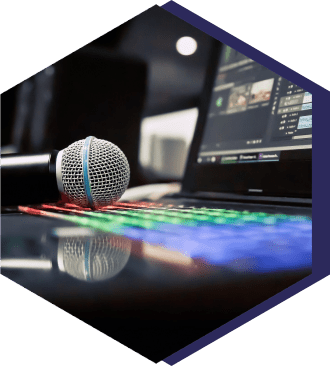 Why you need voice over

Voice over is a production technique used in the audiovisual industry that adds an external voice, meaning a voice that doesn’t belong to one of the individuals appearing in the video sequence. This narrative device is often used in films, documentaries, video games and ads. Voice overs are used to comment on and describe what’s happening in a scene.

It’s important to note that voice over isn’t just for videos. It’s also regularly used for prerecorded information like messages in airports or waiting rooms.

Recording a voice over in several languages involves transcribing and translating the source video so that a new audio file can be recorded in the target language. Then the old voice over is replaced with the new one.

It may seem easier to add subtitles to your video, but for certain formats, voice over has significant benefits. Unlike subtitles, a voice over allows the viewer to concentrate on the video so they can be more immersed in the video content. This is especially important when things are moving quickly, making it difficult to understand all the information.

Adding a voice over to your video will also be easier than dubbing it.

Where voice over can be used

ITC: your video voice over agency

At ITC Translations, we offer a comprehensive audiovisual production service. In addition to voice over, we offer subtitling and dubbing services. For all these services, we use the latest software and equipment with frequent updates to keep up with changes in the industry.

Our artistic directors have many years of experience directing numerous professional actors. Our actors work in theater, radio and TV and know how to convey the emotions behind your message.

With 20 years of experience in translation, we have experience managing multilingual projects and several actors simultaneously.

For all your audio projects, we can split the audio into multiple files, rename them according to your specifications and apply the compression of your choice.

Looking for a foreign voice over agency for your next video? Contact us today to discuss your project.

Looking for the right partner to add a voice over to your videos? We’re here to help!